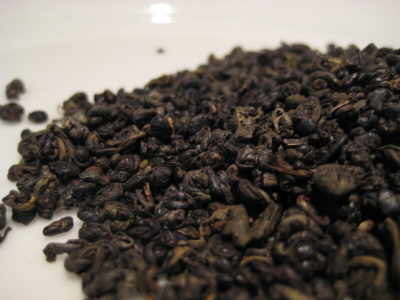 Literally a Pearl Tea and is a form of China Tea in which each leaf has been rolled into a small round pellet. Pinhead just means more tightly rolled than the usual Gunpowder Tea. Its English name comes from its resemblance to grains of gunpowder. This rolling method of shaping tea is most often applied either to dried green tea which is the most commonly encountered variety outside China or Oolong Teas.

Gunpowder tea production originates with the Tang Dynasty (618–907) It was first introduced to Formosa (now Taiwan) in the 19th century. Gunpowder tea leaves are withered, steamed, rolled, and then dried. Although the individual leaves were formerly rolled by hand, today most gunpowder tea is rolled by machines (though the highest grades are still rolled by hand). Rolling renders the leaves less susceptible to physical damage and breakage and allows them to retain more of their flavouring and aroma. In addition, it allows certain types of Oolong teas to be aged for decades if they are cared for by being occasionally roasted.