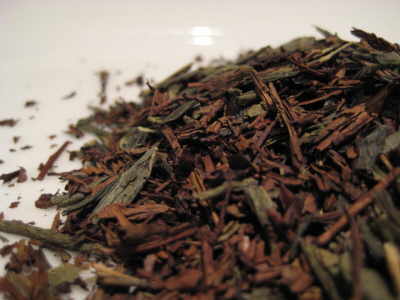 It is occasionally called  Hojicha, and is a superior quality Bancha mature leaf tea that has been roasted. The story goes that it came as an idea to a tea merchant in the early 20th century who wanted to prolong the life of tea that he had overbought and came up with the idea of roasting it. I am not at all sure this can be true as the tradition of roasting Japanese tea has been around for centuries but its a charming tale nevertheless.

Japan has been producing teas for between 1000 and 1200 years, and all production is devoted to green teas. Some, however, undergo further processing such as roasting and in the case of Genmai Cha, additions in the form of rice kernels. They are usually rather more expensive than teas from China