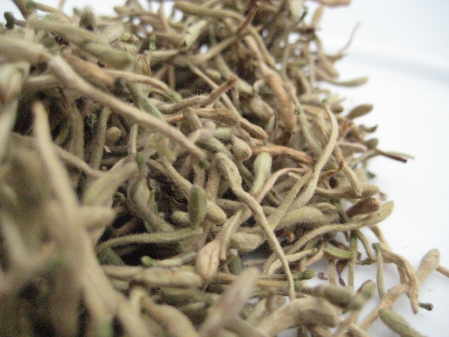 The Lonicera genus, from which Honeysuckle Flowers are harvested, is a native to the Northern Hemisphere. There are around 180 different species and two thirds of them are native to China. This particular fragrant Honeysuckle, as its name suggests, is a Japanese form and is used in herbal traditional medicine.

Honeysuckle Flowers are used in herbal traditional medicine around the world for cleansing and as a digestive but are thought of principally as a Chinese remedy. In China they are used to remove toxicity and for clear sight as well as treating boils and abscesses. Ancient Chinese folklore claimed that it was useful for snakebites (although this editor doubts its effectiveness as such).

Much folklore about the flower seems to be concerned with the heart in the form of romance in that it is a symbol of love with the fragrance said to induce passionate night time dreams. In China it is believed that bringing the bloom into the house will presage a wedding within twelve months.

The buds and flowers are often made into cordials and tea but also incorporated into sweets.

Whatever the use they are put to they make a delightful drink – well worth a try for pleasure if nothing else.

Honeysuckle is so named because the sweet, edible nectar can be sucked directly from the flowers. The name Lonicera is from Adam Lonicer, a Renaissance botanist.