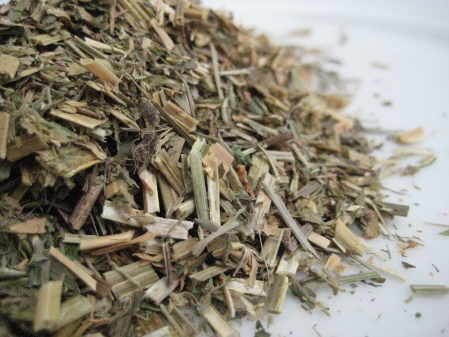 Lucerne (Medicago sativa) is a deep-rooting perennial plant with numerous small clover-like spikes of blue or violet flowers of upright growth. It is the plant from which Alfalfa seeds are obtained.

Its foliage is green, succulent, and being an early crop is in a sense of some value as an agricultural plant. It yields two rather abundant green crops in the year – of a quality greatly relished by horses and cattle – it fattens them quickly and was much esteemed for increasing the milk of cows.

One of the objections to growing it as a crop is the three to four years required before it attains full growth. When this plant is found in Britain growing wild it is merely an escape from cultivation. It may possibly have been a native of Europe; it is of great antiquity, having been imported into Greece from the East after Darius had discovered it in Medea, hence its name. It is referred to by Roman writers, and is cultivated in Persia and Peru, where it is mown all the year round. It first came into notice in 1757 in Britain.

It is also known as Purple Medicle or Buffalo Herb, and in China as Mu Su

The Chinese who call it Mu Su used it to stimulate appetite and to treat digestive problems, particularly ulcers.

There is some evidence in clinical trials that the herb was found to reduce the serum cholesterol levels and is suggested as an aid in cases of arteriosclerosis.