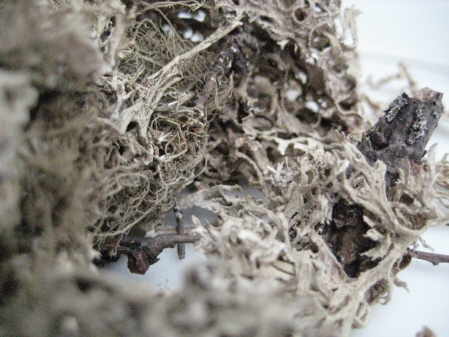 Oak Moss (Evernia prunastri), is a species of fruticose (branched, bushy) lichen highly valued in perfumery for its heavy, oriental fragrance and as a fixative base. It is almost exclusively used by the perfume industry these days.

It can be found in mostly mountainous temperate forests throughout the whole of the Northern Hemisphere from France, Portugal and Spain, much of Central Europe and even some parts of the USA.  It grows almost exclusively on the trunk and branches of  mature oak trees, but is also sometime found on the bark of other deciduous trees and conifers like the Firs and Pines.

A less common and less prized species (Evernia furfuracea), having similar properties, is often and mistakenly included under the same common name, which is a translation of the French mousse de chêne but is actually more properly known as Tree Moss.

Oakmoss is harvested commercially and then usually exported to France, specifically the Grasse region, where it is used to extract an absolute oil and various other compounds which are used in the finest perfumery as a fixative and form the base notes of some of the most famous perfumes in the world. They are key components in Fougére and Chypre class of perfumes making excellent use of the Lichen’s distinct and complex odour which is often described as woody, sharp and slightly sweet.

The Lichen harvested from conifers tends to have a turpentine note to it being more resinous in character and is generally referred to as Tree Moss as mentioned above.

Oak Moss was used in perfumery as early as the 16th century. Baskets filled with it have been found in the ancient royal tombs of Egypt, but whether it was intended for perfume or for food is not now known. Oak Moss contains a starchy edible substance. A mixture of acids extracted from it is used in drugs for treating external wounds and infections.