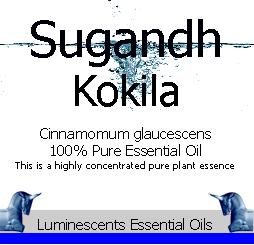 Sugandh Kokila (Cinnamomum glaucescens ) is a large-sized evergreen tree species native to the tropical Himalayan regions of the Kingdom of Nepal, Sikkim and Bhutan. It grows wild quite naturally in both the hills and plains up to an altitude of 1200 metres.  The wood of C. glaucescens imparts an oil rich in safrole, myristicin and elemicin. Almost all parts of the plants are aromatic. Berries of this plant also yield this Sugandha Kokila oil of high commercial value.

The oil is a gift to the perfume industry and is often used as a flavouring for all manner of foodstuffs from sweets to pickles.

It is an unusual plant to propagate.  The seed ripens from the end of October to the end of November but the seeds lose all their viability within about two months, so you should sow them as soon as you can after collecting them. It is the seeds from which the oil is made and they have the flesh washed from them as soon as they are harvested and then the seeds are allowed to dry quite naturally in the Sun turning every other day It is from these dried seeds that the essential oil is then distilled.