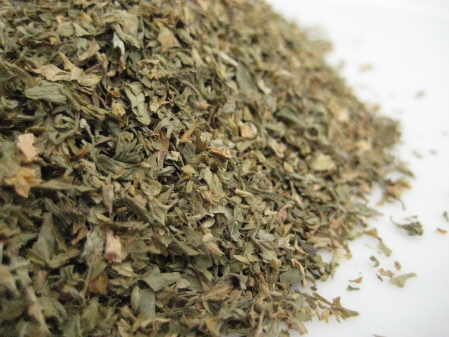 Parsley Leaf is a bright green, biennial herb and used also as a herb that is very common in Middle Eastern, European, and American cooking. It is used for its leaf in much the same way as coriander (which is also known as Chinese parsley or cilantro), although it has a milder and quite different flavour.

Two forms of parsley are used as herbs: Curly Leaf and Italian or Flat Leaf (P. neapolitanum). Curly leaf parsley is often used as a garnish. Many people think flat leaf parsley has a stronger flavour, and this opinion is backed by chemical analysis which finds much higher levels of essential oil in the flat-leaved cultivars. One of the compounds of the essential oil is apiol. Another type of parsley is grown as a root vegetable (Petroselinum crispum)

The use of curly leaf parsley is often favoured, because it can not be confused with poison hemlock like flat leaf parsley or chervil.

In parts of Europe, and particularly in West Asia, many foods are served with chopped parsley sprinkled on top. The fresh flavour of parsley goes extremely well with fish. Parsley is essential to several West Asian salads, e.g., tabbouleh which is the national dish of Lebanon. In Southern and Central Europe, parsley is part of bouquet garni, a bundle of fresh herbs used to flavour stocks, soups and sauces. Additionally, parsley is often used as a garnish. Persillade is mixture of chopped garlic and chopped parsley. Gremolata is a mixture of parsley, garlic, and lemon zest.

Parsley is valued as a breath-freshener, due to its high concentration of chlorophyl.

When crushed and rubbed on the skin, parsley can reduce itching in mosquito bites.

Parsley is high (1.70 g per 100 g, in oxalic acid, a compound involved in the formation of kidney stones and nutrient deficiencies.

In the middle ages parsley was used to perform abortions. Many times it killed both the unborn child and the mother.