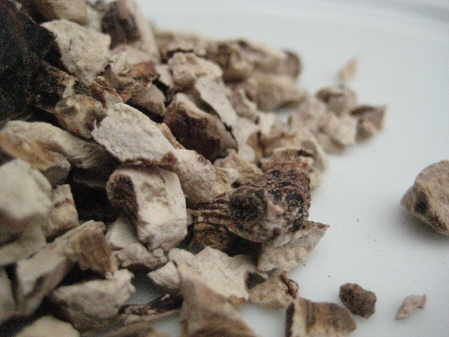 The Cree Indians of Northern Alberta use Calamus Root (Acorus calamus) also most commonly known as Sweet Flag or Sweet Root, for a number of medicinal purposes which include as an analgesic for the relief of toothache or headache, for oral hygiene to cleanse and disinfect the teeth, the fight the effects of exhaustion or fatigue, and to help cure/prevent a hangover.

The tea is excellent when applied topically to sores, burns and ulcers.

Calamus root has been used in Asia for at least the last 2000 years for a number of beneficial reasons. The ancient Chinese used it to lessen swelling and for constipation. It promotes peristalsis.

In India, Ayurvedic medicinal practice has used the root to cure fevers, and for asthma and bronchitis, as well as an all around sedative.

The root was also used by the ancient Greeks and included in the traditional remedies of many other European cultures.

The aroma makes calamus root essential oil highly valued in the perfume industry. The essence from the rhizome is used as a flavour for pipe tobacco.

When eaten in crystallized form, it is sometimes called “German ginger”.

In Europe the herb was often added to wine, and the root is also one of the possible ingredients of the original absinthe.. It is still used in bitters.

In Lithuania Ajeras (Sweet flag) is added to their home baked black bread.

The Essential oil of the Calamus Root is most often known as Sweet Flag Oil and can be found here:-