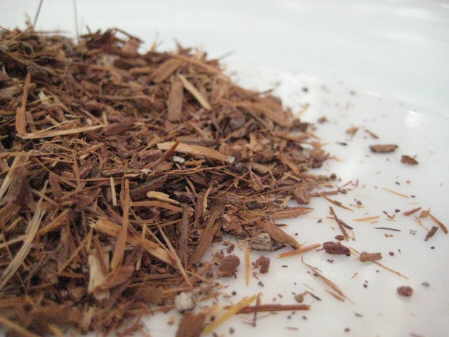 The Catuaba is a medium-sized tree found in the Amazon forests of northern Brazil.

It has traditionally been used for it’s aphrodisiac properties. The Topi Indians have known and expounded upon the sex-enhancing properties of Catuaba bark for many centuries. The two species preferred and used by the Brazilians are Erythroxylum catuaba and Trichilia catigua (this product).

The dried bark is also considered a central nervous system stimulant and a bark decoction is used for nervousness, poor memory, and sexual weakness.

The historic, traditional use of this herbal tonic is legendary. Many say it is the most famous of all the Brazilian aphrodisiac plants. It is a strong tonic and nervous system fortifier, known for its general capability of giving strength and relieving fatigue. The effect is pronounced in men, especially as a libido enlivener. Many songs praising its wonders have been sung by the Brazilian Indians. It is often used in combination with Muira Puama for tonifying the male sexual organs, and is used specifically as an aphrodisiac and for impotence.

It has reported benefits in relieving insomnia from hypertension, restless sleeping patterns, and even in helping to arrest failing memory. There is a saying in South America that says, ” Until a father is 60, the son is his; after that the son is Catuaba’s.” Catuaba is considered an “innocent” aphrodisiac, meaning no adverse side effects have been reported in its use. Catuaba is usually consumed as a tea made from the bark of this small shrub. Its quite a soft bark but benefits from simmering in water for a few minutes to make a strong brew rather than steeping in water already boiled in our opinion.