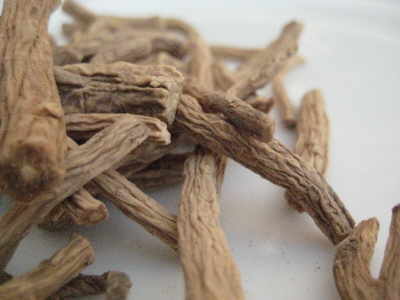 Codonopsis pilosula known in China as Dang Shen Root is a flowering perennial plant belonging to the Bellflower family (Campanulaceae) to which our Canterbury Bell belongs to and is native to Eastern Asia where its habitat includes forest and meadows.  It is sometimes known as Poor Man’s Ginseng. There are about 40 different species of this particular plant and most of them grow only in the Far East.

The plant produces twining stems that can grow up to 2 metres in length and has yellowish green bells shaped flowers with purple spots showing on the insides and produces a quite large seed pod ( around 2.5 centimetres in length)

The fresh plant is often to be found steamed in Chinese cuisine added to soups or eaten as a vegetable but it is the dried root of the plant that is used in Chinese medicine and is traditionally given to stimulate the appetite and to provide a stimulus for energy, rather like Ginseng, the roots are considered to be a tonic although it is considered somewhat weaker than Panax Ginseng and Panax notoginseng. In China it is used to combat weakness and as a liver and spleen tonic