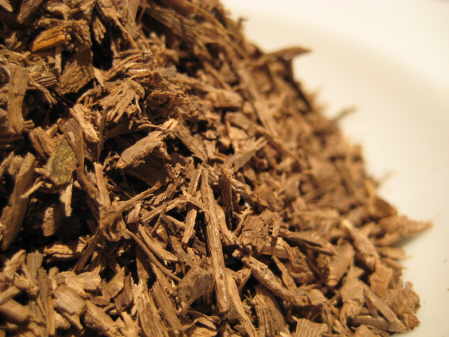 It is not safe to use pareira if you are pregnant. It might start your menstrual period and cause a miscarriage. Its also best to avoid pareira if you are breast-feeding. Not enough is known about how it might affect the nursing infant.

Some people might try to inject pareira into the bloodstream, but this is UNSAFE AND SHOULD NOT BE ATTEMPTED UNDER ANY CIRCUMSTANCES

The root is the most valuable part of the plant medicinally. It grows around 14 or so feet  but requires support so it tends to grow through other plants to obtain it. If grown along the ground it is considerably shorter.

The stems are woody, light, and covered with a rough bark, which is continually coming off in small flakes. The leaves are very large and broad. The flowers are quite small, and sort of green in hue. The fruit (berries) are round, and black when ripe. The root is large, woody, and very long and creeping.

It is usually used for fluid retention and menstrual regulation but contains tubocurarine, an ingredient in modern intravenous (IV) anesthetics used to block nerve signals and paralyze muscles. However, very little, if any, of the tubocurarine in pareira gets absorbed into the body when taken by mouth. It has also been used historically in chronic inflammation of the bladder.

Its most notable use and the one recorded the most is to help in removing long term kidney stones although greatly favoured by Homeopaths no scientific studies have been performed on this plants interactions that it is impossible to say with any certainty that the plant’s use for kidney stome elimination can be supported and must be largely tradition and folklore.