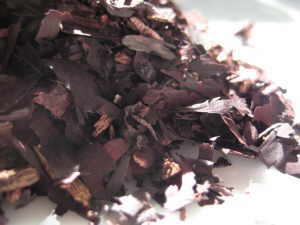 Alkanet Root, also known as Alkanna tinctoria, Batschia canescens, Hoary puccoon, Lithospermum canescens & Dyer’s Bugloss is cultivated in Central and Southern Europe for its dye, which is readily extracted by oils and spirit of wine. It is used in the pharmaceutical industry to give a red colour to salves and in staining wood in imitation of rosewood, or mahogany. This is done by rubbing it with oil in which the Alkanet root has been soaked.

Alkanet Root is now primarily used as a natural dying agent, and it imparts a ruby red color to natural fibres, wool, wood, stone, lip balm, lipstick, ointments, salve, soap, lotion, and to tint oils, vinegar, tinctures, varnishes, or wine. In the past, Alkanet Root was used to improve the appearance of low quality wines and ports, and to give an aged appearance to wine corks. In soap, Alkanet will yield shades of pink, blue, and purple, depending upon the amount used, types of oil used, and the alkalinity of the soap.