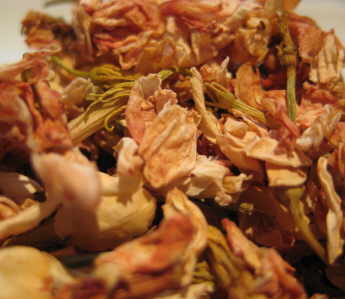 It is sometimes known by other names such as True Jasmine, Poet’s Jasmine, Star Jasmine, Night Blooming Jasmine (although that is Jasmine sambac), and Jessamine

Jasmine Flower (Jasminum grandiflorum) is thought to be native to Iran but is now well known and cultivated in Asia and Europe where it was, in the l6th century, mainly used as a source of perfume.

There are so many plants which are called Jasmine and they are classified into 5 sections  Alternifolia, Jasminum, Primulina, Trifoliolata, and Unifoliolata.

It is sometimes known by other names such as True Jasmine, Poet’s Jasmine, Star Jasmine, Night Blooming Jasmine (although that is Jasmine sambac), and Jessamine

Although the flowers alone are rarely used medicinally today in the Western World, Jasmine flower syrups were once used very effectively for coughs (it is an expectorant and an anti spasmodic) and the ptisane made from the blossoms (not to be confused with China or Japanese Jasmine teas which are either Black or White tea flavoured or scented with jasmine) to rinse sore eyes and wounds.

Jasmine flower makes a calming and sedative infusion, taken to relieve tension and is both very fragrant and soothing.

The oil is considered antidepressant and relaxing. It is used externally to soothe dry and sensitive skin.

It is still used widely throughout the Middle East and China where its extensive medicinal benefits are appreciated rather more than the beauty of its fragrance which seems to appeal rather more than in the Western world.

Jasmine gave its name to the jasmonate plant hormones such as methyl jasmonate which was isolated from the oil of Jasminum grandiflorum, the plant from which these flowers have been harvested and led to the discovery of the molecular structure of jasmonates. The Wikipedia entry for Jasmonates, if you are interested is here.

It contains several different compounds such as salicylic acid, linalool, and other alkaloids, and these give the plant its bitter, cooling, and astringent properties which are so useful in dealing with many complaints.