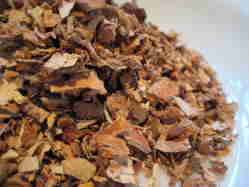 Birch Bark is used very much like Wintergreen. It can be used as an infusion as it aids in detoxification of the blood. The bark can be helpful for a poultice for boils and sores and as well as used as an astringent skin wash.

The Salycilates in Birch bark have been used effectively against warts. (commercial wart removing liquids are made from concentrated salycilic acid) The bark of Birch as well as the essential oil of Birch both contain salicylates that can ease sore muscles or joint pain if applied externally. Birch oil decreases inflammation in tissues and provides a counter-irritant when applied to inflamed or irritated joints. Additionally, Birch bark as well as the buds have been used when antibacterial, antiviral and cell regenerative qualities are needed. This makes it great for wounds of many types.

As an infusion it helpful in cases of loose bowels and was once used extensively (and still is in some cultures) to expel worms.

The Birch is associated with the feast of Pentecost in Central and Eastern Europe, and most of Russia, where its branches are used as decoration for churches and homes on this day.

The Birch is sometimes known as the oldest tree in Britain and is considered a pioneer species because when the ice caps retreated, it mved in on the devastated land, growing quickly and then rotting to leave more fertile earth in which other species of plant could take over. In its rapid life cycle birch pushes upward too fast to develop a strong heart wood, but this makes it perfect for some woodwork products

Birch sap is full of fructose and is cool, refreshing and clear and very easy to tap. It is often used in almost all parts of Europe to make a wine or cordial from but also to flavour beer or spirits.