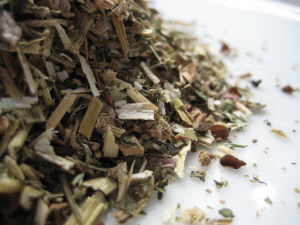 Buckwheat , also known as Beech Wheat or Common Buckwheat is generally made in to a tea best known in Japan by the name of sobacha but is also distilled into whiskey and beer.

Despite the name, it is not related to wheat, and it is not a grass. It is related to Sorrel, Rhubarb and Knotweed.  Because its seeds are eaten and rich in complex carbohydrates, it is referred to as a pseudocereal. The cultivation of the grain declined sharply in the 20th century with the adoption of nitrogen fertilizer that increased the productivity of other staples.

A porridge can be made from it too.

It contains no gluten and despite its name is not related to Wheat at all.

It has a number of medicinal uses most notably perhaps because it contains Rutin which is used for strengthening capillary wall and general venous insufficiency. It is anti inflammatory so is used for skin conditions like eczema and an anti-oxidant.

It was domesticated and first cultivated in SE Asia around 6000 BC, and from there spread to Central Asia and then to Europe via the Middle East. It is likely that it was first domesticated in China however. Buckwheat first appears in Europe at least 5000 years ago in Scandinavia and later in the Balkans.

In Russia it is known as grechka which literally means Greek due to its introduction there by the Byzantine Greeks.

Buckwheat was one of the earliest crops introduced by Europeans to North America. Dispersal around the globe was complete by 2006, when a variety developed in Canada was widely planted in back in China.