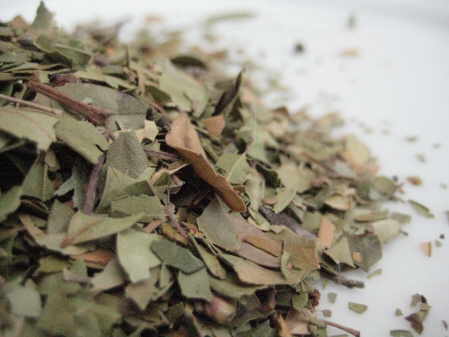 Myrtle Leaves come from the common Myrtle.It is sometimes known as True Myrtle which is a native all across the Mediterranean, particularly on Corsica and Sardinia. Not to be confused with the only other Myrtle (Myrtus Nivellei) which is better known as Saharan Myrtle

Myrtle leaves as well as the volatile oil (Myrtii Oleum; MO) obtained from the leaves are used to lower the blood glucose level in type-2 diabetic patients in Turkish folk medicine.

Myrtle has been conventionally used to treat coughs, bronchitis and other respiratory infections. The astringent properties of myrtle have also earned the reputation for promoting good digestion, treating urinary tract disorders, and preventing wound infections. Recent laboratory studies suggest that the herb contains anti-inflammatory substances, making it a viable astringent compound. This finding accounts for the plant’s enduring popularity as a wound and cough treatment but it is frequently used to treat bronchitis, bruises, bad breath, wounds, as well as colds, sinusitis, and coughs.

There are other health benefits of myrtle. It is believed to be antiseptic, and can be used as a tonic to hasten the healing process. Healers in Middle Eastern countries have traditionally used myrtle as a treatment for diabetes.

The 1980s saw scientists putting the myrtle herb under the microscope in an attempt to identify the active ingredients that lends it its various medicinal properties. Results of one study indicated that extract from the herb can decrease blood sugar in mice. This explains the association associating myrtle with diabetes. However, there is still no concrete proof that the herb is safe to use and effective for people who have the disease.

Myrtle is made into sachets and used in cooking. In Crete, olive oil is often flavoured by steeping myrtle leaves in it for 3 weeks.

Grinding the leaves to release their wonderful scent is a practice known as far ago as in ancient Greece where people cherished the application of myrtle. Greek athletes were said to have worn wreaths of evergreen myrtle leaves during the Olympics. Ancient civilizations believed that myrtle was a symbol of immortality, and they used it in love potions and as treatment for many ailments.

In the era of the Roman Empire, myrtle was used to treat urinary and respiratory ailments.

French women drank tea made from crushed myrtle leaves, believing that it would help to preserve their youthful appearance and overall vigour. Some actually believed myrtle to hold a cure for cancer, but little evidence was found to prove the theory.