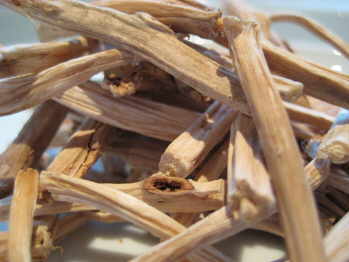 Shatavari root is a species of asparagus common throughout Sri Lanka, India, Nepal and the Himalayas growing between one and two metres tall and likes poor rocky soils at high altitude. It was first described botanically in 1799

It has multiple traditional and medicinal uses and the increasing the demand for the plant is and because harvesting it is a destructive process as it is the root which is taken in combnation with it habitat being gradually destroyed deforestation by man, the plant is now considered endangered in its natural habitat.

The herb is a traditional Ayurvedic antispasmodic; an aphrodisiac, demulcent, digestive, diuretic, galactogogue, and is often used for infertility and for women’s health.

Shatavari is highly regarded as an herb for women’s health problems and it is the most important herb in Ayurvedic medicine for problems connected to women’s fertility. The name Shatavari is from an Indian word meaning “the curer of a hundred diseases”.

It is used as a menstrual regulator, to help prevent miscarriage, for menopausal symptoms with hot flushes, irritability, irregular memory and dryness, for lactation, loss of libido, infertility, as an aphrodisiac, and for the female reproductive organs.

Shatavari is also used as a tonic for circulatory, digestive and respiratory organs, ulcers, bronchial infections, diarrhoea, rheumatism, diabetes, bleeding ulcers, gastritis, Crohn’s disease, dysentery with bleeding, dry cough, sore throat, inflammation in the lungs due to dryness and heat, male fertility and impotence, building body mass and muscle tissue, nourishing the blood, the immune system, calming the nerves, and insomnia. A pretty all round kind of herb really!

Externally it is used to treat stiffness in the joints.