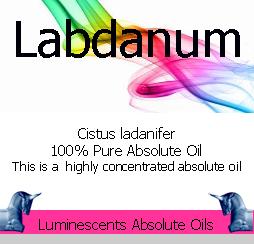 Labdanum Absolute is much valued in perfumery because of its property resemblance to Ambergris, which has been banned from use in many countries because its precursor originates from the sperm whale, which is an endangered species. Modern use of Ambergris is virtually all synthetically produced nowadays as are most modern perfumes. Labdanum, as a natural substance has similar fixative and base properties. It is also known as Rock Rose or Jara.

Labdanum absolute is extensively used as a fixative in various fragrance applications, as well as being useful in skincare for the treatment of wrinkles, mature skin, and dry skin.

CAUTIONS: Labdanum Absolute should not be used on broken or irritated skin.