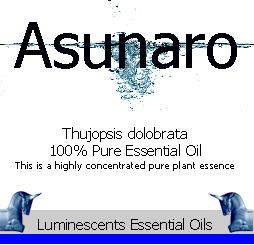 OTHERWISE KNOWN AS:  False arborvitae or just called by its genus name Thujopsis.

SCENT: The odour of the oil is ‘woody,’ slightly reminiscent of Cedarwood oil; similar to that of Thuja plicata.

Asunaro Wood is a conifer in the cypress family (cupressaceae) the sole member of the genus Thujopsis. It is endemic to Japan. Asunaro is the Japanese name for this species, which has never acquired a widely used or easily recognised English name, though it is occasionally known as False arborvitae or just called by its genus name Thujopsis. (pronounced Thu-Yopsis) It is also known as Hinoki but I am not sure why, there are lots of stories. Hinoki is a Japanese Cypress but it is entirely different tree.

It is a very dense and slow-growing evergreen conifer with an overall conical shape that is mostly native to the moist forested areas in central Japan. Mature trees typically reach around 30 metres in height and somewhat taller in their native habitat and tend to grow in groves rather than singly. It is considered a valuable ornamental tree in Japan and is sometimes known locally as Asunaro It is not at all a drought tolerant tree but has received the Royal Horticultural Society’s Award of Merit as it is grown as an ornamental wherever conditions suit it in other countries around the world now.

The wood from the tree is considered valuable too as it is durable and very highly scented. The tree is often planted in cultivation around temple complexes as well as Japanese formal gardens.