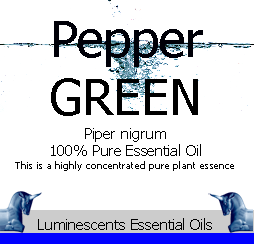 SCENT: Green Pepper essential oil is both warming and comforting. It has a sweet, warm, even fruity pepper note. Does not have the harshness associated with the freshly ground spice, yet is a very exotic, masculine, spicy oil

Pepper (Piper nigrum) from which Green Pepper essential oil, not to mention Black and White Pepper Essential Oils are distilled, is a plant which was originally a forest plant and this climbing woody vine uses trees or other supports to grow to about twenty feet high, but is normally kept to about 12 feet for commercial purposes and has a lifespan of only about twenty years.

Green Pepper is credited with being an anti-inflammatory, carminative, circulatory stimulant, detoxifying, diuretic, expectorant, laxative, and as a muscle relaxant. The essential oil is composed of various chemical constituents and includes the following: Eugenol, Safrole, Thujene, Farnesene, A-Pinene, B-Pinene, Sabinene, Limonene, Beta Caryophyllene, and Camphene. It is viewed also as being a warming, soothing Aphrodisiac, mental stimulant that is uplifting, strengthening and inspiring agent.

The word pepper is derived from the Latin word piper, which in turn is taken from the Sanskrit word pippali. Both the spice and oils obtained from it have been used since the times of the Ancient Romans and Greeks and at one point the Turks levied a tax on pepper, while the French, Portuguese and Dutch often went to war in the middle ages to fight for this lucrative trade from the far east.

CAUTIONS:Black pepper oil may cause irritation to sensitive skins and using too much could over-stimulate the kidneys and should be avoided in pregnancy due to its possible skin sensitizing effect.