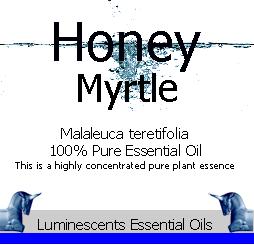 SCENT: Honey Myrtle has a strong, sweet and citrusy scent. A bit like Lemon Myrtle but with more depth and a slight honey undertone.

Honey Myrtle (Maleleuca teretifolia) is a small native tree to Australia in the Tea Tree family but is now grown all over the Mediterranean as an ornamental because of its dwarf habit, hardy nature and rather pretty bottle brush like flowers. The flowers are usually white but occasionally pink tinged and in profusion.

Very antiseptic and due to its high Citral content is often used for its aroma alone as a room scent or in deodourisers. For that reason it is also of interest to the perfume industry.

Being so antiseptic and belonging to the family of Tea trees, it is often used as an alternative to Tea Tree as it has similar properties such as being anti fungal, antiseptic, anti viral, anti microbial, anti spasmodic, analgesic and anti bacterial. It does smell much better than Tea Tree, however, in this editor’s opinion – mainly due to its high Citral content so despite its name it is more lemony than honey but there are detectable honey tones to the oil. It is considered to be a good insect repellent.