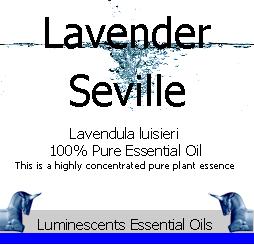 SCENT: Lavender Seville essential oil smells very strongly, as one might expect, and is now considered one of the most fragrant of all Lavender oils but its very resinous due to its Major compounds: alpha-Luisieryl acetate, alpha-Luisierol, 1,8-Cineol, Lavandulyl acetate in this edit0r’s opinion .

Lavender Seville Spanish Essential Oil (lavendula luisieri)  is an evergreen shrubby Iberian perennial which has been grown commercially for various uses including aromatherapy. It is prevalent  in the south-west corner of Spain and is widely grown in Portugal. It is often found with Lavendula viridis with occasional hybrids being produced.It is a Poke lavender or Lavendula Stoechas sub secies.

There is a cultivar on sale, ‘Tickled Pink’