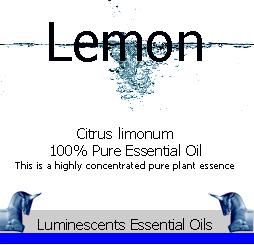 SCENT: Lemon Essential Oil has an aroma which is similar to fresh lemon rinds except richer and more concentrated.

The Lemon (Citrus limonum) was originally a small thorny evergreen tree native to India. It is now common in Southern Europe, Florida and California.

The fruit and its oil has been historically recognized as a cleanser. It is recognized as being antiseptic, and as having refreshing and cooling properties. Research has also shown the essential oil to enhance the ability to concentrate. It is highly prized for its high anti-bacterial properties. On skin and hair it can be used for its cleansing effect, as well as for treating cuts and boils.

just about everything but be careful of ratios – Lemon can easily be outbalanced with only a small proportion of other oils.

The fruit was well known in Europe by the middle ages, and Greeks and Romans were advocates of its therapeutic properties. The fruit reached the height of its fame when the British began using the citrus fruit to counteract the effects of scurvy along with Lime.

Lemons came to Europe via southern Italy and were well known and used extensively by the Romans at least as far back as the first century after Christ but they were not widely cultivated at that time. They were introduced to Persia and Egypt and what we know know as Iraq around 700 AD and were first recorded in literature during the 10th Century in an Arabic treatise on farming techniques. They were used as an ornamental in Islamic gardens and at the same time they were being widely cultivated all over the Mediterranean.

CAUTIONS:Non-toxic, but may cause skin irritation in some. Lemon is also phototoxic and should be avoided prior to exposure to direct sunlight.