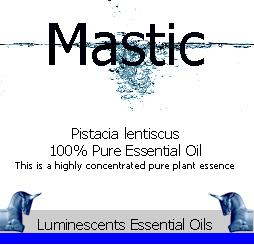 SCENT: Mastic Essential Oil has a pungent and resinous with slightly bitter tone

PLANT PART USED: Gum obtained from the twigs and leaves

Mastic is produced from an evergreen shrub or small tree of the Pistachio family growing up to 4 m (13 ft) tall which is cultivated for its aromatic resin, mainly on the Greek island of Chios from which the essential oil is then steam distilled. It is native throughout the Mediterranean region, from Morocco and Iberia in the west through southern France and Turkey to Syria and Israel and Palestine in the east. It is also native to the Canary Islands. The name derives either from the Greek verb mastichein (to gnash the teeth, origin of the English word masticate) or massein (to chew)

The essential oil is an Analgesic, Anti-bacterial, Anti-fungal, Anti-inflammatory, Anti-spasmodic, Anti-viral, Decongestant, Lymph decongest, Lymphatic support, Tonic. It has been traditionally used for varicosities and as a decongestant.

Apart from its medicinal properties, cosmetics and culinary uses, the gum is also used in the production of high grade varnish.

The Pistacia tree has been introduced into Mexico as an ornamental plant, where it is very prized and fully naturalized. The trees are grown mainly in suburban areas in semi-arid zones and remain undamaged although the regime of summer rainfall is contrary to its original Mediterranean climate.