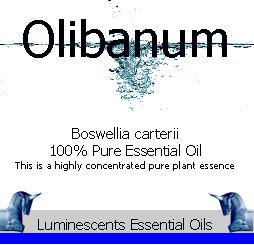 SCENT: Olibanum essential oil has a warm, rich smell with a tang of lemon and woody camphor. It is relaxing, uplifting calming and mildly antiseptic.

COLOUR: Olibanum essential oil has a golden yellow to light brown hue which darkens with age

Olibanum is one of the frankincenses and grows as a short shrub, about 3-7 metres with an abundance of leaves and blossoms with white or pale pink flowers.

Olibanum is tapped from Boswellia trees through slashing the bark and allowing the exuded resins to harden. Tapping is done 2 to 3 times a year with the final taps producing the best resin due to its higher aromatic terpenes, sesquiterpenes and diterpenes content. High quality resin can be visually discerned through its level of opacity. Omani olibanum is said to be the best in the world, although quality resin is also produced in Ethiopia, Yemen and Somalia.

Olibanum is used in perfumery and aromatherapy. The essential oil is obtained by steam distillation of the dry resin. The smell of the olibanum smoke is due to the products of pyrolysis. Olibanum was lavishly used in religious rites.

Olibanum has been treasured for centuries and was burnt as the original incense to appease the gods. It was used by many cultures to treat almost all known ailments. It is botanically related to the tree that the essential oil myrrh is taken from.

Although it is better known as frankincense” to westerners the resin is also known as Olibanum, which is derived from the Arabic al-lubán (“the milk”) a reference to the milky sap tapped from the Boswellia tree. Some have also postulated that the name comes from the Arabic term for “Oil of Lebanon” since Lebanon was the place where the resin was sold and traded with Europeans. Compare with Exodus 30 : 34, where it is clearly named levonah, meaning either “white” or “Lebanese” in Hebrew.

The lost city of Ubar, sometimes identified with Irem in what is now Oman, is believed to have been a centre of the Olibanum trade along the recently rediscovered ‘Incense Road’. Ubar was rediscovered in the early 1990s and is now under archaeological excavation.