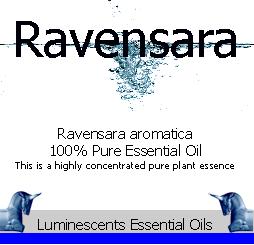 The Ravensara tree grows to around 20 metres high with several buttress roots at the base. It has a reddish bark that is very aromatic, and small green elliptical leaves. It is a rare oil in retail terms as few stockists carry it but it is not particularly uncommon.

Reported Attributes of the Essential Oil:

The people of Madagascar refer to Ravensara essential oil as the oil that heals. The name of the tree in Malagasy means aromatic leaf, which may be the reason why different botanical species are sometimes offered under this name. It is also known by various other names, mostly in Madagascar, as Havozo, Hazomanitra and Tavolomanitra.

Because of its camphoraceous odour it is often described as an alternative to eucalyptus (although much sweeter) and as such is used extensively in the perfume industry.