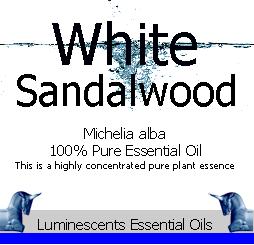 White Sandalwood, the leaves, flowers, and complete form of which resemble the Magnolia very closely and to which ancient family (over 95 million years)  it belongs, is native to tropical and subtropical South and South East Asia and Southern China. The whole genus consists of about 50 different species.

The blossoms of White Sandalwood generally form clusters among the leaves, rather than singly at the branch ends as Magnolia does. It is sometimes known as White Champaca or Michelia Alba

There are around 50 different species of White Sandalwood, one of which. Michelia champaka is very well known and sought after in perfumery circles and is simply known as Champaka Absolute.