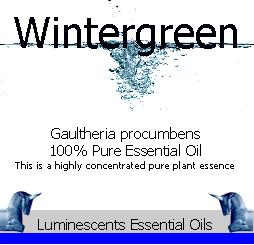 It now has no known western aromatherapy associations and is generally used nowadays for its aroma.

The essential oil blends well with Ylang Ylang, Peppermint, Marjoram Sweet, Lavender, Birch and of things quite well with Vanilla.

Wintergreen and Sweet Birch oil are both nearly identical in chemical composition and aroma; similarly, both have been used in traditional folk remedies. This tradition has led to the discovery of Methyl Salicylate, its main ingredient, as a pain reliever. The herb is a traditional native North American remedy, used for aches and pains and to help breathing while hunting or carrying heavy loads.

It has a history of use as a pain reliever. It is also believed to increase the speed of healing for skin disorders, and when added to lotions, acts as a natural moisturiser. The aroma is very recognisable and is one of those scents people associate with medicinal and vapour rubs.

In the USA Wintergreen is often sold as Birch oil which leads to a great deal of confusion when Americans buy Birch oils from abroad. Two of the three Birches smell very tarry which is not what the customer is looking for.

Safety in young children, nursing women, or those with severe liver or kidney disease is not documented.