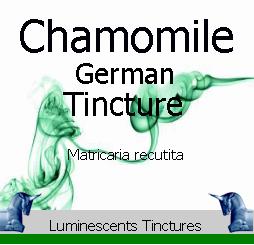 German Chamomile Flower Tincture (Matricaria recutita) is from one of the two plants known as chamomile: the more popular German chamomile (this product) (Matricaria recutita) and Roman, or English, chamomile (Chamaemelum nobile ). Although they belong to different species, they are used to treat similar conditions. Both are used to calm frayed nerves, to treat various digestive disorders, to relieve muscle spasms, and to treat a range of skin conditions and mild infections.