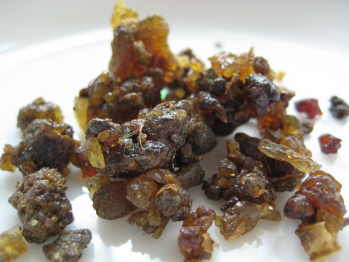 Also known as Guggul and gum guggulu are the names given to a yellowish resin produced by the stem of the plant. It is also known as The Indian Bdellium Tree.

Mukkul Myrrh should be used with caution by persons with liver disease and in cases of inflammatory bowel disease and diarrhoea. A physician should be consulted for any case of elevated cholesterol and/or triglycerides.

The Mukkul Myrrh tree (Commiphora mukul wightii) is a small, thorny plant distributed throughout India. This resin obtained from it has been used historically and is also the source of modern extracts of Guggul. It is quite often referred to as the Indian Bdellium Tree due to its ancient traditions.

The tree is grown commercially throughout India and Pakistan and the gum obtained form Mukkul is called Guggul or Guggulu, It has a fragrance not dissimilar to that of Myrrh so is often used in perfume manufacture and incense. It is the same product that was known in Hebrew, ancient Greek and Latin sources as Bdellium.

The resin originates from the stem of the Mukkul myrrh tree, a thorny plant that grows throughout India where it has been used in the management of arthritis, rheumatism, boils, cardiovascular problems, dermatitis, eczema, high cholesterol, obesity and psoriasis.

It wasn’t until the 1960s that attention was first focused on Mukkul’s cholesterol-lowering abilities. It was then that Indian researchers discovered an ancient Sanskrit medical text that described the symptoms and treatment of high cholesterol – Guggul (the extract from Mukkul) was one of the main treatment recommendations.

Since then, both animal and human studies have confirmed Guggul’s effectiveness in this area. In fact, the Indian Government has now approved Guggul as a treatment for high cholesterol.

When burnt of charcoal this produces a fragrant, dense smoke. The burning coals which let out the smoke are then carried around to different rooms and held in all corners for a few seconds. This is said to drive away evil spirits as well as remove the evil eye from the home and its family members rather in the fashion of smudging.