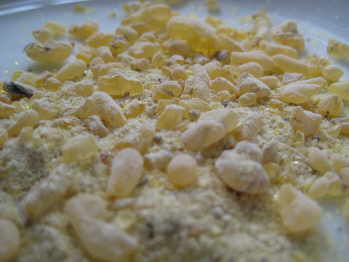 Sandarac comes from the natural exudate or tapping of the Tetraclinis Articulata tree, which grows in the North West of Africa particularly in the Atlas Mountain range.  A similar resin, sometimes also and incorrectly named as Sandarac, can also be obtained from cypress pines, genus Callitris, that grow in Australia, North Africa, and North America. It is also sometimes known as Gum Juniper.

This product is the genuine resin from Tetraclinis Articulata.

The burning of tree resins and herbs goes back to ancient times as an offering to the Gods and Goddesses, for meditation and for ceremonies. Used for the same purpose today, resins can be used singly or mixed to provide the perfect incense to create an evocative atmosphere.

Sandarac has a warm clean fragrance if burnt by itself and blends well with other herbs and resins.

Used in incense, Sandarac is also used as a substitute for Mastic and for a few medicinal purposes, most notably an Arabic remedy for diarrhoea.

It is brittle, faintly aromatic when cold, and translucent resin, usually available in the form of small, pale yellow, dusty tears; it is used as incense and in making a spirit varnish for coating paper, leather, and metal. The initial film is brittle, but it can readily be modified to yield elastic films by adding elemi, an oleoresin.