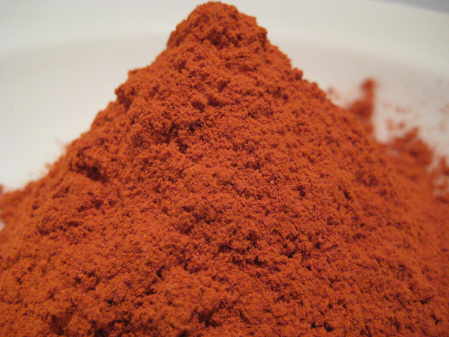 Red Sandalwood Fine Ground Powder (Pterocarpus santalinus) has been used for over 4000years in India and the Near East. It has a calming and stabilizing effect on the mind, body, and spirit, which is why it has been used in meditation by traditional Hindus and Buddhists for centuries. Burn Red Sandalwood shavings or use in sachets and baths. Sprinkle areas to cleanse of negativity.

The wood is not aromatic however. Nor is it from the same species as Yellow Sandalwood (Santalum album – always check the Linnaean classification if in doubt) which is on the CITES register and is way, way more expensive

Red sandalwood, also known as Rakta Chandana, has been used in Ayurvedic medicine as an antiseptic, wound-healing agent, and as an anti-acne treatment. The shavings tend to be used more in ritual. Red sandalwood is used in soap to yield a dark maroon to purple colour depending upon the alkalinity/acidity of the soap.

Some people like to drink it as a herbal tea for its rather bitter taste. It is antipyretic, anti-inflammatory, anthelmintic, tonic, aphrodisiac, and diaphoretic. The shavings are best use for tea.