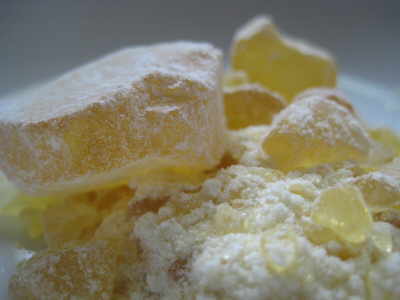 Rosin Gum  is a solid form of resin obtained from pines and some other plants, mostly conifers, produced by heating fresh liquid resin to vapourise the volatile liquid terpene components. It is semi-transparent and varies in colour from yellow to black. At room temperature it is brittle, but it melts at stove-top temperatures. It chiefly consists of different resin acids, especially abietic acid.

In industry it is the precursor to the flux used in soldering. The tin-lead solder commonly used in electronics has about 1% rosin as a flux core helping the molten metal flow and making a better connection. It’s frequently seen as the burnt or clear residue around new soldering.

It is also extensively used for its friction-increasing capacity. Such uses include rosining the bows of stringed instruments such as violins or cellos to produce sound. For this purpose, extra substances such as gold and silver are sometimes added to the rosin for extra friction and/or highly-disputed “tone improvements”.

Ballet dancers sometimes rub their shoes in powdered rosin to reduce slipping before going on stage. Bull riders rub rosin on their rope and glove for additional grip. Baseball pitchers and ten-pin bowlers may have a small bag of powdererd rosin nearby, to use on their throwing hand, for better control of the ball.

A mixture of pitch and rosin is used to make a surface against which glass is polished when making optical components such as lenses.