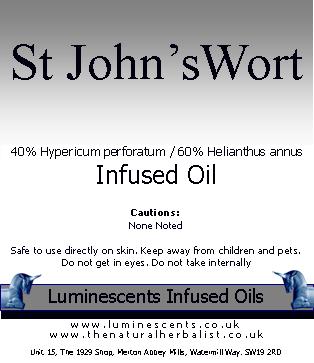 St. John’s Wort may cause increased sensitivity to sunlight. Other side effects can include anxiety, dry mouth, dizziness, gastrointestinal symptoms, fatigue, headache, or sexual dysfunction.

Research shows that St. John’s Wort interacts with some drugs. The herb affects the way the body processes or breaks down many drugs; in some cases, it may speed or slow a drug’s breakdown.

When combined with certain antidepressants, St. John’s Wort may increase side effects such as nausea, anxiety, headache, and confusion.

St. John’s wort is not a proven therapy for depression. If depression is not adequately treated, it can become severe. Anyone who may have depression should see a health care provider. There are effective proven therapies available.

The first recorded use of Hypericum for medicinal purposes dates back to ancient Greece, and it has been widely used ever since. The herb, infused in oil, was also used by Native Americans internally as an abortifacient. They used it externally as an anti-inflammatory, astringent, and antiseptic which is what this typical infused oil is used for.

The aerial parts of the plant can be cut and dried for later use in the form of herbal tea, which has long been enjoyed both for its pleasant (though somewhat bitter) taste and for its medicinal properties.

In modern medicine, standardized Hypericum extract (obtained from H. perforatum) is commonly used as a treatment for depression and anxiety disorders. In homeopathy, Hypericum is used in the treatment of numerous medical problems, yet the rate of success has not been adequately documented, as is very often the case in homeopathy.

Historically, the flowers and stems of St John’s wort have also been used to produce red and yellow dye.