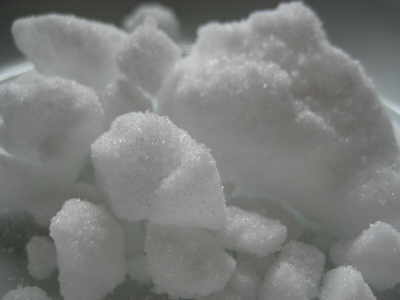 Camphor is a waxy, white or transparent solid with a strong, aromatic odour. It is a terpenoid with the chemical formula C10H16O.

It is found in wood of the camphor laurel, a large evergreen tree found in Asia (particularly in Borneo and Taiwan). It also occurs in some other related trees in the laurel family, notably Ocotea usambarensis. It can also be synthetically produced from oil of turpentine.

It is used for its scent, as an ingredient in cooking (mainly in India), as an embalming fluid, in religious ceremonies and for medicinal purposes. A major source of camphor in Asia is camphor basil.

In medicine. Camphor is readily absorbed through the skin and produces a feeling of cooling similar to that of menthol and acts as slight local anaesthetic and antimicrobial substance. There are anti-itch gel and cooling gels with camphor as the active ingredient. Camphor is an active ingredient (along with menthol) in vapour-steam products, such as Vicks VapoRub, and it is effective as a cough suppressant. It may also be administered orally in small quantities (50 mg) for minor heart symptoms and fatigue.

It is also believed that camphor will deter snakes and other reptiles due to its strong odour. Similarly, camphor is believed to be toxic to insects and is thus sometimes used as a repellent – particularly in deterring moths and their newly hatched grubs.

For culinary purposes camphor is mostly used as a flavoring for sweets in Asia. In ancient and medieval Europe it was widely used as ingredient for sweets but it is now mainly used for medicinal purposes. This product is not suitable for ingestion.

Camphor was used as a flavouring in confections resembling ice cream in China during the Tang dynasty (A.D. 618-907). Camphor is widely used in cooking (mainly for dessert dishes) in India where it is known as Pachha Karpooram (literally meaning “green camphor” though “Pachha” in Tamil can also be translated to mean “raw” which is “Pachha Karpooram’s” intended meaning).