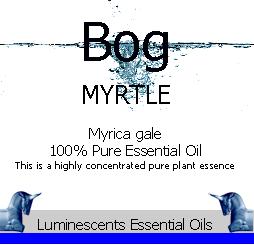 Myrica Gale from which Bog Myrtle Essential Oil is distilled is also sometimes known as Sweet Gale and is the badge of the Campbells.

It is a deciduous, bushy shrub, growing to 4 feet high. The wood and leaves are fragrant when bruised. The leaves, not unlike a willow or myrtle, are oblanceolate, tapering entire at the base, toothed and broadest at the apex, the upper side dark glossy green, the underside paler and slightly downy, under which are a few shining glands. The male plant produces flowers in May and June in crowded, stalkless catkins. The fruit catkins are about the same size, but thicker, and have closely-set, resinous nutlets, the flowers being borne on the bare wood of one year’s growth. The sexes are on different plants.

The chemical constituents of the plant are easily altered in proportion by the climate from where it is grown and if wild collected or pampered in cultivation. Most notably its Limonene content is greatly increased in the oil when the plant has been grown under drought conditions when its preference is for damp, acid soils and a cool temperate climate. It is affected notably by climate change. The lowest Limonene content we have found is around 10% from wild collected plants in Scotland from which distillations took place before 2017 whilst the highest has been from Tuscany at 53%, Our current stock is 43% Limonene content which makes it less sweet and more resinous. It is cultivated in Hungary, China and Poland as well as Lithuania – the oils from all areas having different ratios of the principal natural chemical ingredients.

Bog Myrtle is most commonly used as an alternative to the ever popular citronella as it is reputed to repel insects but bruised leaves or a little oil poured on a wood block can be used in linen cupboards very effectively.

A well know High Street chemist was planning to increase production of the plant in Scotland for use as an essential oil for treating sensitive skin and acne it is rumoured and it is also used by Totally Herby of Scotland as an insect repellent. Diluted it is finding some use in the Equine market.

The leaves are often dried to perfume linen, etc., their odour being very fragrant, but the taste bitter and astringent. It is extremely good to allay thirst. The catkins, or cones, boiled in water, give a scum beeswax, which is utilized to make candles. The bark is used to tan calfskins; if gathered in autumn, it will dye wool a good yellow colour and is used for this purpose both in Sweden and Wales. The Swedes use it frequently in strong decoction to kill insects, vermin and to cure the itch. It is undergoing a small revival in the UK now. The dried berries are put into broth and used as spice. In China, the leaves are infused like tea, and used as a stomachic and cordial.

The foliage has a sweet resinous scent, and is a traditional insect repellant, used by campers to keep biting insects out of tents. It is also a traditional ingredient of Royal Wedding bouquets, and is used variously in perfumery and as a condiment.

In northwestern Europe (Germany, Belgium and Great Britain), it was a much used in a mixture called Gruit as a flavouring for beer from the Middle Ages to the 16th century, but it fell into disuse after hops had become widely available. Danish brewery Thisted Bryghus produces Porse Guld, a strong beer flavoured with the plant.

More recently the branches have been used as a substitute for hops in Yorkshire and put into a beer called there ‘Gale Beer.’