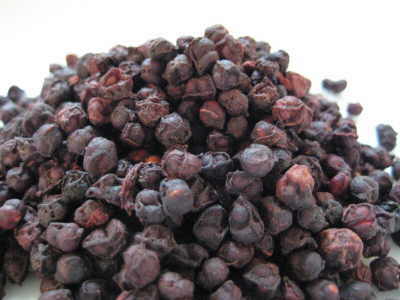 Schizandra is a major tonic herb in Chinese medicine, long prized by everyone from emperors to family herbalists for its ability to prolong youth ( yes well!) but it does help to increase stamina, and prevent fatigue.

Schizandra is gaining in popularity as a tonic or adaptogen that can balance bodily functions and improve the body’s response to stress.

I am sometimes asked why some Schizandra berries appear to have a bloom coating them and some not and as far as I can ascertain the answer is simply because some of the harvest comes from Northern China (apparently the best quality) and from where this product was derived and some from the Southern provinces. It is colder in the north and the berries there are often frosted and better for it before harvesting (as in Sloe berries here where the folklore is that one shouldn’t pick them before the first frosts) the theory being that the frost concentrates and preserves better the chemical constituents in the dried fruit.