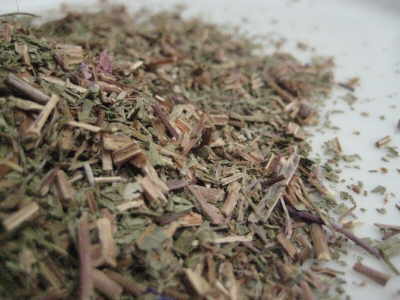 Rose Bay Willow Herb (Chamaenerion angustifolium) is a native of the Northern Hemisphere temperate regions often found atthe permieter of woodland and forested areas, It is known as Fireweed in the USA and Great Willowherb in Canada. It is an herbaceous perennial.

Fireweed as a name is derived from the fact that it tends to colonise fire damaged woodland easily and rapidly after a fire event. Angustifolium is from the latin where angustus means narrow and folium means leaved. Often labelled as Augustifolium as in all the Lavenders.

First Nationals in America used the herb as a poultice, packing a simmered and then cooled layer of the leaves (either from dried or fresh leaves as the source) against boils and cuts to draw out the pus and any impurities. They also thought that the poultice of the herb stopped an open wound closing over too quickly where pus was still being drawn so making the use effective.

In Russia, its leaves are traditionally fermented and used as a tea, and, before the introduction of tea from China starting in the 17th Century was greatly valued and was exported in large quantities to Western Europe as Koporye Tea (Копорский чай), Russian Tea or Ivan Chai.

Still drunk today in Russia and Eastern European states as well as by the people of the Steppes but not nearly as popular as it was in the 17th Century.

In Alaska, Sweets, Syrups, Jellies, and artisan Ice Cream are all made from the abundant fireweed in that state. Monofloral honey made primarily from fireweed nectar has a distinctive, spiced flavour easily recognised once experienced.