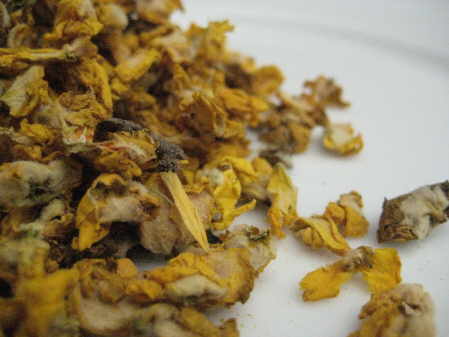 It has a long history in herbal medicine. Its botanical family name Scrophulariaceae  is derived from scrofula, an old term for chronically swollen lymph glands, later identified as a form of tuberculosis about which, it was once thought, the King’s touch, could cure! Early on, this herb gained a reputation as a respiratory remedy. And physicians from India to England touted it as a remedy for coughs and chest congestion.

Mullein tea is made from the dried leaves and/or flowers of the plant. The herbal tea helps in the treatment of respiratory problems like bronchitis, asthma, whooping cough, pneumonia and congestion. It is excellent for treating bladder or urinary tract irritations, including hematuria (bloody urine). Some herbalists advise its use for insomnia and for cleansing the blood. It is a vermifuge and is also used to alleviate the effects of some allergies. The cold tea may also be used to swab a swollen and itchy anus due to haemorrhoids as it is an astringent.