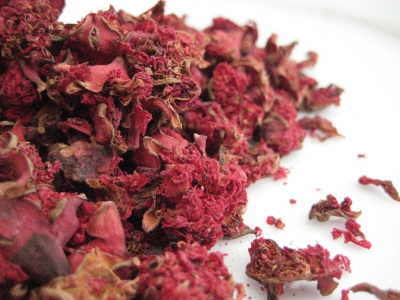 Also known as Anar Phool in India and elsewhere as Granada or Granado, Dulim, Dadima, Granatapfel, Melegrano or Pomo Granato.

Dried pomegranate flower (when powdered) can be used in the preparation of a herbal tooth powder. The flowers can treat gingivitis and are good for overalll oral health.

The tree is native of Iran stretching to the Himalayas in northern India and has been cultivated since ancient times throughout the Mediterranean region of Asia, Africa and Europe.

It was known to central and southern India where it was brought from Iran about the first century A.D. and was reportedly growing in Indonesia in 1416. It has been widely cultivated throughout India and drier parts of southeast Asia, Malaysia, the East Indies and tropical Africa since. The most important growing regions today are Egypt, China, Afghanistan, Pakistan, Bangladesh, Iran, Iraq, India, Burma and Saudi Arabia. There are some commercial orchards in Israel on the coastal plain and in the Jordan Valley.