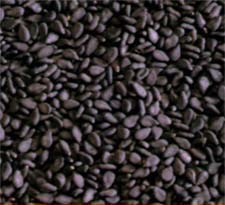 Sesame is a flowering plant in the genus Sesamum. The precise natural origin of the species is unknown, although numerous wild relatives occur in Africa and a smaller number in India. It is widely naturalised in tropical regions around the world and is cultivated for its edible seeds.

Sesame is grown primarily for its oil-rich seeds, which come in a variety of colours, from cream-white to charcoal-black. The small sesame seed is used whole in cooking for its rich nutty flavour (although such heating damages their healthful poly-unsaturated fats), and also yields sesame oil. Sesame seeds are sometimes added to breads, including bagels and the tops of hamburger buns. Sesame seeds may be baked into crackers, often in the form of sticks.

Sesame seeds can be made into a paste called tahini (used in various ways, including in hummus) and a Middle Eastern confection called halvah. In India, sections of the Middle East, and East Asia, popular treats are made from sesame mixed with honey or syrup and roasted (called pasteli in Greece). Sesame seeds are also sprinkled onto some sushi style foods. Ground and processed, the seeds can also be used in sweet confections. In Greece seeds are used in cakes, while in Togo, seeds are a main soup ingredient. The seeds are also used on bread and then eaten in Sicily.

Japanese cuisine uses sesame seeds in many ways. One is to make goma-dofu which is made from sesame paste and starch. Whole seeds are found in many salads and baked snacks as well. Chefs in tempura restaurants blend sesame and cottonseed oil for deep-frying. Tan and black sesame seed varieties are roasted and used for making the flavouring gomashio.

East Asian cuisines, like Chinese cuisine use sesame seeds and oil in some dishes, such as the dim sum dish, sesame seed balls and the Vietnamese bánh rán.

Sesame flavour (through oil and roasted or raw seeds) is also very popular in Korean cuisine, used to marinate meat and vegetables.

The seeds are rich in manganese, copper, and calcium (90 mg per tablespoon for unhulled seeds, 10 mg for hulled), and contain Vitamin B1 (thiamine) and Vitamin E (tocopherol). They contain powerful antioxidants called lignans, which are also anti-carcinogenic. They also contain phytosterols, which block cholesterol production. Sesame contains one lignan unique to it called sesamin. The nutrients of sesame seeds are better absorbed if they are ground or pulverised before consumption.

The above benefits of sesame seem to have been known from Historical times. Apparently the women of ancient Babylon would eat halva, a mixture of honey and sesame seeds, to prolong their youth and beauty, while Roman soldiers ate sesame seeds and honey to give them strength and energy.

In general, the paler varieties of sesame seem to be more valued in the West and Middle East, while the black varieties are prized in the Far East.