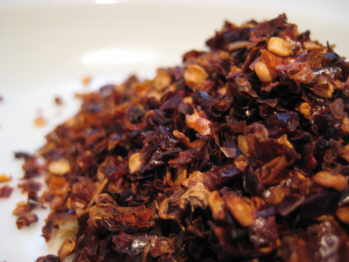 Unripe Habaneros are green, and they colour as they mature. Common colours are orange and red, but white, brown, and pink are also seen.

The Habanero chilli originated in the Amazon region, and from there it has spread right around the world although the principal place of production and use is Mexico.

Today, the largest producer is Mexico’s Yucatan Peninsula. Habaneros are an integral part of Yucatecan food. Habanero chillies accompany most dishes in Yucatan, either in solid or purée/salsa form.

Because of their popularity and ease of growth in the right climate and soil conditions, other modern production centers include Belize, Panama, Colombia, Costa Rica, Equador, Parts of the USA but Mexico is stoll the largest producer.

The Scotch Bonnet is often compared to the Habanero, since they are two varieties of the same species, but have a different appearance. Both the Scotch Bonnet and the Habanero have thin, waxy flesh. They have a similar heat level and flavour. Although both varieties average around the same level of “heat”, the actual degree of piquancy varies greatly from one fruit to another with genetics, growing methods, climate, and plant stress.

The Habanero’s heat, its fruity, citrus-like flavour, and its floral aroma have made it a popular ingredient in hot sauces and spicy foods.

The Scoville scale begins at zero with mild bell peppers and moves to the lower range of peppers measuring 1,500 to 2,500 such as cascabels, four out of ten. The Jalapeño is mid range at about 2,500 to 5,000 Scoville units. The eight out of ten chillies such as cayenne, aji and pequin will rate about 30,000 to 50,00 units, while the Habernero which rates as one of the hottest comes somewhere between 100,00 and 500,000 units. There are hotter chillies – The Naga for instance!