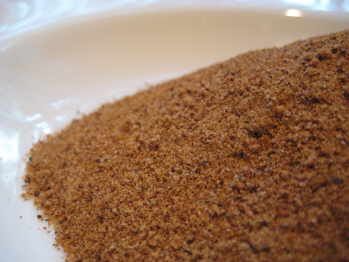 Jerk is a style of cooking native to Jamaica in which meats (traditionally pork, but now including chicken, fish, beef, sausage and even tofu) are dry-rubbed with a fiery spice mixture called Jamaican jerk seasoning or spice.

Jerk seasoning principally relies upon two items: allspice (Jamaican Pimento) and Scotch Bonnet peppers (among the hottest peppers on the Scoville scale). Other ingredients include cloves, cinnamon, scallions (spring onions), n utmeg, thyme, garlic, which is mixed together to form a marinade which is rubbed onto pork, chicken, or fish.

Jerk seasoned chicken, pork, or fish is said to be at its best when barbecued over aromatic wood charcoal or briquettes. Pimento (allspice) wood or berries placed over coals give Jerk its authentic flavour.

The Spanish word charqui (dried meat) gave the name to both jerk and jerky. Jamaican “jerk” ties well into its Spanish/Caribbean roots, since of all the modern barbecueing processes, in its purest form it corresponds the closest to historical descriptions of the Caribs’ method. The Caribs would construct a grid of green sticks some distance above a smoldering green pimento wood (that is, the wood of the allspice tree) fire in a shallow pit, place meat on the grid and cover it with pimento leaves to impart further flavour while trapping the smoke for maximum effect.

Originally the meat was cut into strips and dried in the sun for use at a later date. A small fire was lit under the meat so that the smoke would prevent flies from laying their eggs on the raw meat.The “Native Americans” also use this method and also call it jerk meat.