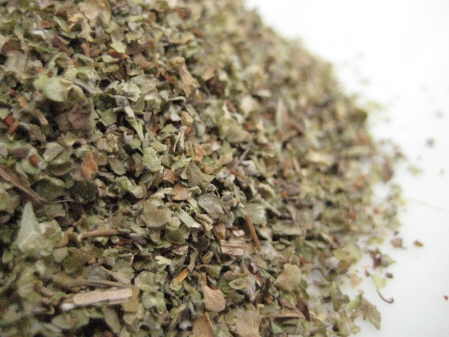 Sweet Marjoram (Origanum majorana, Lamiaceae) is a cold-sensitive perennial herb or under shrub with sweet pine and citrus flavors. It is also called  Knotted Marjoram and Majorana hortensis.

Oregano (Origanum vulgare, sometimes listed with Marjoram as Origanum majorana) is also called Wild Marjoram. It is a perennial common in southern Europe in dry copses and on hedge-banks, with many stout stems 30-80 cm high, bearing short-stalked somewhat ovate leaves and clusters of purple flowers. It has a stronger flavour and a more penetrating quality.

Hardy Marjoram or Italian Marjoram is a cross of marjoram with oregano that is much more resistant to cold, but is slightly less sweet.

Marjoram is cultivated for its aromatic leaves, either green or dry, for culinary purposes; the tops are cut as the plants begin to flower and are dried slowly in the shade. It is often used in herb combinations such as Herbes de Provence and Za’atar.

Marjoram was called amaracum in Latin, which in turn was taken from Greek amarakos. The origin of the Greek name is not known, but maybe it came from further East.

Marjoram’s reputation as aphrodisiac in Roman literature is probably due to the similarity of amaracum to Latin amor love, which is linguistically not related.