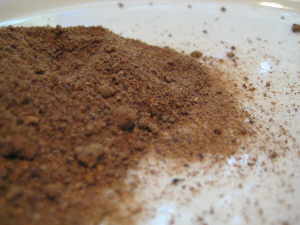 A juniper berry is the female seed cone produced by the various species of junipers. It is not a true berry but a cone with unusually fleshy and merged scales, which give it a berry-like appearance. The cones from a handful of species, especially Juniperus communis, are used as a spice, particularly in European cuisine, and also give gin its distinguishing flavour. Juniper Berry Powder is simply the cone freeze dried and ground to a fine powder.

Juniperus communis berries vary from four to twelve millimetres in diameter; other species are mostly similar in size, though some are larger, notably J. drupacea (20–28 mm). Unlike the separated and woody scales of a typical pine cone, those in a juniper berry remain fleshy and merge into a unified covering surrounding the seeds. The berries are green when young, and mature to a purple-black colour over about 18 months in most species, including J. communis (shorter, 8–10 months in a few species, and about 24 months in J. drupacea).

The flavour profile of young, green berries from which Juniper Berry Powder is made is dominated by pinene; as they mature this piney, resinous backdrop is joined by “green-fresh” and citrus notes. The outer scales of the berries are relatively flavourless, so the berries are almost always at least lightly crushed before being used as a spice. They are used both fresh and dried.

Juniper Berry Powder or whole berries is used in northern European and particularly Scandinavian cuisine to “impart a sharp, clear flavour” to meat dishes, especially wild birds (including thrush, blackbird, and woodcock) and game meats (including boar and venison). They also season pork, cabbage, and sauerkraut dishes. Traditional recipes for choucroute garnie, an Alsatian dish of sauerkraut and meats, universally include juniper berries.