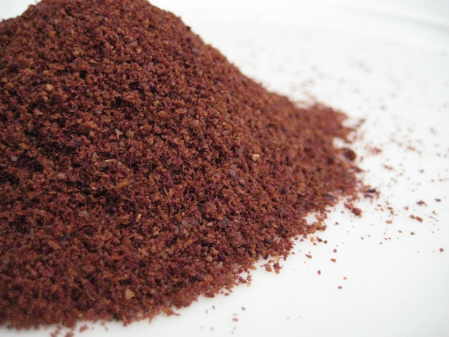 Sumac is derived from the drupes of the Genus Rhus which are harvested, the hairy coating removed and then ground to a deep-red to purple powder, used in Middle Eastern cuisine as a spice with a sour taste, particularly with salads.

In North America, the smooth  Rhus glabra, and the staghorn Rhus typhina, are sometimes used to make a beverage, termed “sumacade” or “Indian lemonade” or “rhus juice”. This drink is made by soaking the drupes in cool water, rubbing the active principle off the drupes, then straining the liquid through a cotton cloth and sweetening it. Native Americans also used the leaves and berries of the smooth and staghorn sumacs combined with tobacco in traditional smoking mixtures.

Species including the fragrant sumac Rhus aromatica, the littleleaf sumac, R. microphylla, the skunkbush sumac, R. trilobata, the smooth sumac, and the staghorn sumac are grown for ornament, either as the wild type or as cultivars.

The leaves of certain sumacs yield tannin (mostly pyrogallol), a substance used in vegetable tanning. Leather tanned with sumac is flexible, light in weight, and light in colour, even bordering on being white.

Dried Rhus wood glows under UV lighting (blacklight) or so it is reported.

Rhus is a genus of approximately 250 species of flowering plants in the family Anacardiaceae. They are commonly called sumac or sumach. The name derives from the Greek name for the sice , rhous.

The spice has a glorious colour and a delicious tangy, sour, slightly salty flavour. Sumac powder is the ground berries of a sumac bush, native to the Middle East. The ground spice is used liberally sprinkled over rice in Turkey and Iran and also used as a dry seasoning on salads in the Middle East. When used to flavour meats or fish, the sour flavour of the spice mellows slightly on cooking and is a great flavour enhancer.

Preheat oven to 180 C / Gas mark 4. Toast pittas 5 to 10 minutes in the preheated oven, until crisp. Remove from heat, and break into bite size pieces. In a large bowl, toss together toasted pitta pieces, cos lettuce, spring onions, cucumber and tomatoes. In a small bowl, mix the parsley, garlic, sumac powder, lemon juice, olive oil, salt, pepper and mint. Pour over the pitta mixture, and toss just before serving.