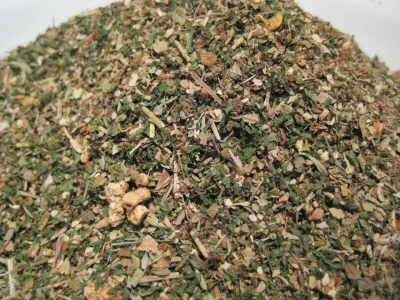 Chimichurri is a kind of green sauce, also used as a marinade, for grilled meat. It is originally from Argentina but is now used in countries as far north as Mexico.

Chimichurri is Argentinian and to some extent from Uruguay and is a very popular sauce used with grilled meat in many Latin American countries now.

It is said that the unusual name comes from Jimmy McCurry, an Irishman who is said to have first prepared the sauce. He was marching with the troops of General Jasson Ospina in the 19th century, sympathetic to the cause of Argentine independence. The sauce was popular and the recipe was passed on. However, Jimmy McCurry was awkward for the native people to say. Some sources claim Jimmy’s sauce’s name was corrupted to Chimichurri, while others say it was changed in his honour.

Other similar stories involve Jimmy Curry, an English meat importer; a Scot, James C. Hurray, travelling with gauchos; and an English family in Patagonia overheard by the group of Argentinians that were with them while saying “give me the curry”. All the stories share an English speaking colonist and the corruption of names or words by the local population.

Nowdays the recipe has been augmented with additional flavourings such as Paprika, Oregano, Cumin, Thyme, Coriander, Lemon, and Bay Leaf as in this recipe.

It is usually the only seasoning for steak and chorizo sausages in Argentine asados. It can also be used as a marinade for grilled meat.

The preparation is likely a mixture of Spanish and Italian methods, a general reflection of Argentine society as a whole. The essential elements of chimichurri are common to both Spain and Italy. The overall compositions, taste and preparation are similar to French persillade.

Simply mix 2 tablespoons of this Chimichurri mix with a little olive oil, wine or distilled vinegar and some lemon juice to make either a marinade or meat rub.