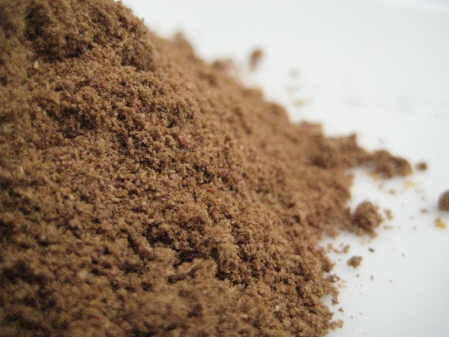 Garam Masala is a blend of ground spices common in Indian, Pakistani and S.E. Asian cuisine, whose literal meaning is ‘hot (or warm) spice’ (Ayurvedic as many of these spices are believed to elevate body temperature in Ayurvedic medicine.)

There are many variants although most traditional mixes use just cinnamon, roasted cumin, cloves, nutmeg (and/or mace) and green cardamom seed or black cardamom pods.

Some recipes also call for small quantities of star anise, asafoetida (hing), chilly, stone flower (known as dagadphool and kababchini  (Cubeb or tailed peppers). The flavours must be carefully blended to achieve a balanced effect.

The composition of Garam Masala differs from region to region with many local recipes across the entire Indian sub continent according to regional and personal taste and none is considered more authentic than any other. The components of the mix are toasted, then ground together.

The blend can be used during cooking, but unlike many spice blends, it is often added at the end of cooking, so that the full aroma is not lost. Garam Masala is not “hot” in the sense that chillies are, but is fairly pungent.