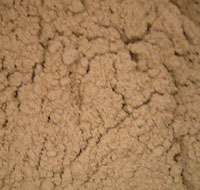 Slippery Elm (Ulmus rubra Muhl) is a species of elm native to eastern North America from southeast North Dakota east to southern Quebec and south to northernmost Florida and eastern Texas. Although similar to American Elm in general appearance, it is more closely related to the European Wych Elm, sharing very similar flower structure with that species. It is less susceptible to Dutch elm disease than many elms, and has a different branching pattern.

The Slippery Elm is a deciduous tree reaching 10-20 m tall and 50 cm trunk diameter. The leaves are 10-18 cm long, with a rough texture, coarsely double-serrate margin and an oblique base. The flowers are produced before the leaves in early spring, in clusters of 10-20; the fruit is an oval winged samara 2 cm long containing a single seed in the center. Slippery Elm may be distinguished from American Elm by the hairiness of the buds and twigs (American Elm has smooth buds and twigs), and by the flowers being very short-stalked.

Slippery Elm is a valuable tree which has many different uses.

The inner bark can be ground into a nutrient-rich gruel. One can survive on this gruel alone for a relatively short period. It also contains a mucilage that is an excellent remedy for sore throats. It may be dried and ground to a powder, then made into a tea. Either the tea or the gruel may be used to soothe the digestive tract as well, such as with irritable bowel syndrome or gastritis. There are no known contraindications for Slippery Elm, since it consists mainly of mucilage and various nutrients; it is not technically a drug. The bark has also been used historically as an abortifacient. It was moistened with water and then inserted into the cervix.

The fibrous inner bark is a strong and durable fibre, which can be spun into thread, twine or rope. It can be used for bow strings, ropes, jewellery, clothing, snowshoe bindings, woven mats, and even some musical instruments.

The wood is used for the hubs of wagon wheels, as it is very shock resistant, owing to the wood’s interlocking grain. It is also used for making bows, as it is both strong and flexible.

Once cured, the wood is also excellent for making fire with the bow drill method, as it grinds into a very fine, flammable powder under friction.