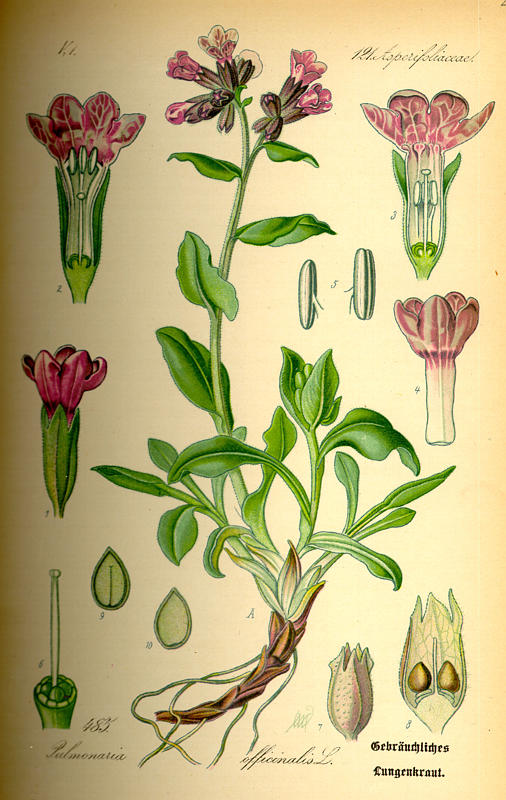 Lungwort (Pulmonaria officinalis) is a perennial plant. The horizontal creeping rootstock produces several bristly stems with alternate, ovate, dark green leaves which are petioled at the bottom of the plant and become sessile near the top. The funnel-shaped flowers grow in terminal clusters from March to May. They turn from rose to blue, both colours being often being found on the plant at the same time.

The scientific name Pulmonaria is derived from Latin ‘pulmo’ meaning Lung   At one time the spotted oval leaves of the plantwere thought to be symbolic of diseased or ulcerated lungs, and so were used to treat pulmonary infections. Nonsensical reasoning onemight say yet the plant is very effective in this field.  The common name in many languages also refers to lungs, as in  German Lungenkraut.

The tea or infusion made from the herb is used very effectively for diarrhoea, haemorrhoids, and especially respiratory problems, coughs, and hoarseness (hence its folk name) and it also has mildly diuretic properties.

To relieve coughing, sip up to three cups of the tea throughout the day. This tea may be made by soaking up to 2 teaspoons of dried lungwort in about 350 mls of boiled water for up to 15 minutes and then strain.

An infusion of the herb, may also be cooled and applied topically to treat hemorrhoids or minor skin irritations to relieve discomfort and itching.